You are here: Home / Supervisor Ridley-Thomas 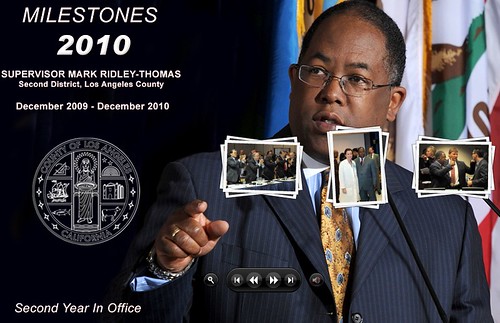 2010 was a productive year for the Second District. Check out some of the highlights from the past year here!

“From Declaration to Action!” That was the theme of this year’s Second Annual South Los Angeles Health & Human Rights Conference, held at the Los Angeles Convention Center on December 10, 2010.

The call to action comes after the drafting last year of a South Los Angeles Declaration of Health and Human Rights.

The declaration calls for the right to: health and behavioral health, education and employment, housing and a safe environment, food and food sovereignty, and dignity and safety.

With the declaration in hand, the community, health, labor activists and residents, were fired up to take turn those words into tangible approaches that will bring better health care to South Los Angeles.

“It’s time for movement again,” declared keynote speaker Mark Ridley-Thomas, L.A. County Supervisor for the Second District. Ridley-Thomas reminded the audience of how much has changed in the year since the group first gathered.

“Last year at this time, we didn’t have a health reform bill in the nation’s capital. There is a lot of debate about the issue itself, but when you think it, it is to be considered progress, significant progress.”

Supervisor Mark Ridley-Thomas today honored Susan Burton for her years of work helping Los Angeles County women rebuild their lives after incarceration. Ms. Burton, who founded A New Way of Life Reentry Project after her own struggles with substance abuse and incarceration, was one of ten finalists for this year’s CNN Heroes Award.

Visit A New Way of Life

The analysis of “re-entry” in Los Angeles County — the process by which incarcerated youths leave custody and seek to establish themselves in society — examines the failures of the current system and proposes 10 steps for improvement.

Los Angeles County’s juvenile probation population is the largest in the nation, at 20,000. Nationwide one in three African American males born in 2001, and one out of six Latino males born that year are at risk of imprisonment, according to the Children’s Defense Fund.

Supervisor Mark Ridley-Thomas today marked the second anniversary of his taking the oath of office with a look back at the year’s many
accomplishments and a vigorous plan of action for the year ahead.

Since taking office on December 1, 2008, Supervisor Ridley-Thomas has spearheaded a number of projects to improve the quality of life in the Second District and throughout Los Angeles County. In partnership with dedicated community leaders, elected officials in all levels of government, and with the continued guidance of his transition team, Supervisor Ridley-Thomas has:

 Reached major milestones in opening a new Martin Luther King, Jr. (MLK) Medical Center, a $400 million investment that will bring the highest quality of patient care to the Second District. The new 38-acre site will include space for an emergency department, inpatient pharmacy, operating rooms and 120 patient beds. Supervisor Ridley-Thomas broke ground on the campus’ $20 million South Health Center in September and is working with the University of California Board of Regents, the newly appointed Board of Directors, and countless community stakeholders to open an Inpatient Tower and a Multi-Service Ambulatory Care Center for outpatient services beginning in 2013;