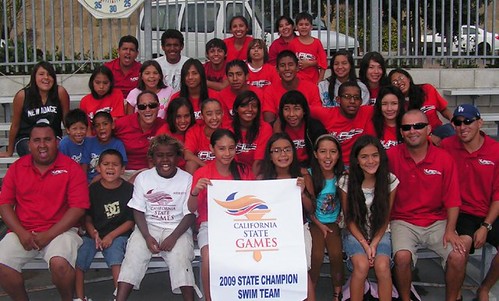 The Los Angeles County Swim Team, 97 youth from three South Los Angeles communities, won the 2009 USA State Swim Championship in San Diego on July 18. The team, representing Jesse Owens, Victoria and Ted Watkins parks of the Los Angeles County Department of Parks and Recreation, is made up of almost 100 boys and girls from 10 to 18 years old.

“We are so proud of the accomplishments of these youth, their commitment and their drive to succeed,” said Russ Guiney, Director of the Department of Parks and Recreation.

Competing against 20 other teams and 800 competitors from all over California, the L.A. County Swim Team garnered 100 gold, silver and bronze medals in 12 events that tested swimmers in every competitive stoke.

“We shocked everyone out there. They were asking who we were and where we were from,” said Fernando Medina, swim coach at Victoria Park Pool. “We made a huge impact as a team.” Competing in the event for the first time, the team from Los Angeles County out swam perennial powerhouse teams from throughout California.

California State Games is a festival of Olympic-style competition for California’s amateur athletes of all ages and abilities. State Games is a community-based member of the United States Olympic Committee. In addition to Summer State Games, they host the California Winter Games with figure skating, ice hockey, skiing and snowboarding.