The campaign, which is featured on 25 digital billboards, 20 traditional billboards and 20 transit shelter posters throughout Los Angeles County,  includes the National Human Trafficking Resource Center’s 24-hour, multi-lingual hotline for victims and community members. The hotline is operated by Polaris and the ad space was donated by Clear Channel. 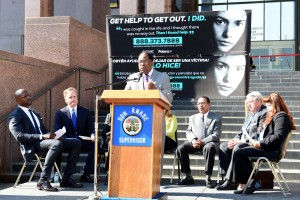 “I would like to commend Clear Channel Outdoor, Polaris and CAST for helping combat sex trafficking in our communities,” said Supervisor Ridley-Thomas. “We need everyone to take notice. These billboards will help spread the word, will educate and raise awareness so that victims know they are not alone and that there is a way out.”

Human trafficking is the world’s fastest growing criminal activity – generating an estimated $150-billion a year. The crime has forced approximately 20.9 million people worldwide to live in modern day slavery, including hundreds of thousands of men, women, and children here in the United States. Los Angeles has become a top hub for modern slavery and human trafficking, making the fight to end the crime locally County important on a national scale.

“These young men and women are somebody’s sons and daughters,” said Buck, of CAST.   “As a community we need to look out for them.”

Polaris and Clear Channel Outdoor have forged a national partnership previously. Beginning in Philadelphia in 2012, the two organizations have since supported campaigns with various anti-trafficking organizations in Baltimore, Las Vegas, Miami, Milwaukee, New Jersey, New York, Phoenix, San Francisco, Seattle, and across the entire state of Texas.  In addition, they formed a partnership two years ago with County Supervisor Don Knabe and the MTA for their first anti-human trafficking campaign in L.A. This marks the second anti-human trafficking supported by Supervisor Knabe and Clear Channel this year.

“It is important that all Los Angeles County residents learn to recognize the signs of human trafficking and do their part to report and combat this horrific crime,” said Supervisor Knabe

“We must change the mindset that allows trafficking to continue,” he said.

To get help or to report a suspected instance of human trafficking, please call the National Human Trafficking Resource Center at 1-888-373-7888 or text BeFree (233733). Hotline Call Specialists are available 24 hours a day, 7 days a week, 365 days a year to take reports from anywhere in the country related to potential trafficking victims, suspicious behaviors, and/or locations where trafficking is suspected to occur.