Rachel Fleming could not contain her tears as she watched hundreds of marchers make their way down Western Avenue to send a loud message to pimps and johns who buy and sell children for sex. As marchers chanted, “Our children are not for sale,” Fleming reflected on her own family’s trauma after her 15-year-old daughter, Brejouneay, was trafficked.

“I see all of this community support and I know I am not alone,” said Fleming, wiping her eyes. “I will tell my daughter that she is not alone. I will tell her that she can overcome this.”

The march, co-sponsored by Los Angeles County Supervisor Mark Ridley-Thomas and Los Angeles City Mayor Eric Garcetti, was organized to send a message of unity for all those who are fighting against the selling and buying of children for sex, as well as to let all adults who exploit children know that the world is watching.

Western Avenue is one of the prime corridors in Los Angeles where children as young as 12 are sold on the street by pimps and purchased by men who take the children to seedy motels to abuse them. It is estimated that in the United States, 100,000 children are trafficked for sex. It is a $32 billion industry increasingly run by gangs.

The march was a welcome sign to Lloydia Smart, owner of L.A. Tropical American Cuisine Belizean restaurant on Western Avenue.

“This is long overdue,” she said as she held up a flyer in solidarity. “We have kids we see on this street that are 13 and 14 years old and guys picking them up.”

Added her cousin Yvonne Godoy, “You’d be surprised because these are family men in suits, nice cars. Do they not have a heart? How could they do this to these girls and then go home to their wives?”

The march is the second one hosted by Supervisor Ridley-Thomas, who is determined to keep a spotlight on the issue. 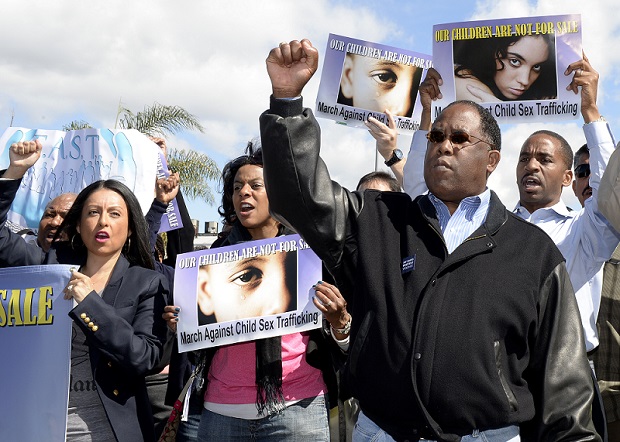 “Someone once said that we can turn the darkness before us into light, and make the rough places into level ground,” he told the marchers as they prepared to set out. “Let us march down this stretch of Western together with dignity, but also determination. We are putting these predators on notice.  Block by block. Life by Life. We are taking back our streets, taking a moral stand and refusing to look away.”

Added Mayor Garcetti: “There are more slaves on the face of this earth than ever before in our history. They are in the mini-malls, in people’s homes, in massage parlors. To the pimps and solicitors, this community warns you, your time is up. This issue is a priority of your mayor and your police department.” 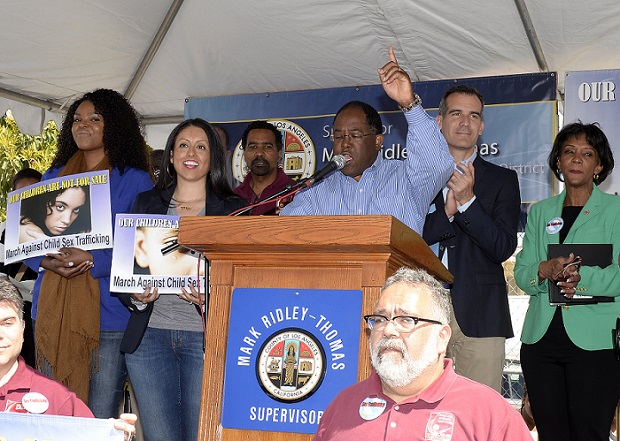 District Attorney Lacey mentioned her office’s new program which seeks to help victims out of the life rather than incarceration.

“We will no longer treat these kids like they are criminals,” she said, and then as a warning shot to predators she added, “If you are out there abusing our children for sex, we are looking for your behind. We will not look the other way.”

Below is a series of videos about the issue of sex trafficking in Los Angeles County: